A Conversation with Christina Civantos, author of Jamón and Halal

ACP intern Liz Tran talks with Christina Civantos about the limits of religious tolerance, writing through experience, and authenticity in rural Spain. 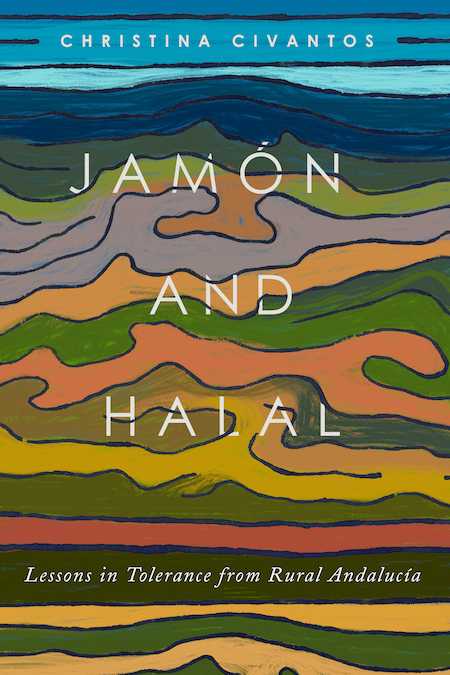 Author Christina Civantos’s third book, Jamón and Halal: Lessons in Tolerance from Rural Andalucía, published by Amherst College Press, reflects on the broader patterns of globalization in contemporary Spain and the tensions found between nationalists and immigrants. In a case study of the rural Andalusian town Órgiva, Civantos examines written, visual, and oral narratives in order to shed light on the workings of coexistence, tolerance and the power differentials that come with them. Her first book, Between Argentines and Arabs: Argentine Orientalism, Arab Immigrants, and the Writing of Identity, helped establish Civantos as a prominent scholar in Arab diaspora studies. Her second book, The Afterlife of al-Andalus: Muslim Iberia in Contemporary Arab and Hispanic Narratives, brought together her interests in migration studies and historical memory and shifted geographically to the Mediterranean Basin. She is currently Professor of Modern Languages and Literature at the University of Miami and has published many scholarly articles.

This interview and accompanying audio has been edited for text and clarity.

Why did you write this book?

The genesis of the book is basically twofold. There are two things that came together. One, in my previous book, The Afterlife of al-Andalus, I was focused on how contemporary writers and filmmakers use the period of medieval Muslim Iberia to address contemporary issues, ranging from nationalism to immigration to Europe, socio-economic problems in post-colonial contexts, and gender inequalities. After finishing that project, I was interested in delving into the issue of tolerance more; trying to understand it more and how that period of Spanish history may or may not help us to reach more peaceful coexistence in the contemporary world.

That was on the one hand. On the other hand, my father is from this very small town in the region of Spain called La Alpujarra. It's like a smaller region within the larger autonomous community of Andalucía. I've been visiting that town for more than thirty years, and I've been able to see tremendous changes there over the years. As I saw this unfold over the years, I was fascinated by this confluence of cultures. I was trying to figure out a way to study this. I'm a researcher, so I always have that drive to figure out what exactly is going on here. How do people in the town view this? How do they make sense of all of these changes? And as I was puzzling over how to do this, because I knew that there were some written accounts about the town, primarily by British expats who had settled in the area, I was trying to figure out: what kind of angle can I take on this? One of my cousins told me about a television show that had come out with an episode devoted entirely to this little town of about 6,000-8,000 residents. I saw the show and immediately thought of a million things that I could say about how they had represented it, etc. So that was where it all took shape, at that moment.

What does religious tolerance mean?

I was interested in finding out how the people who live there—who are from the various different communities—perceive this coming together of different cultures. And in terms of tolerance in a broad sense, it's a tricky concept because it kind of hinges on a few paradoxes. One is that if a society just completely tolerates the intolerant, then intolerance is actually what will dominate. There's this sort of interplay between limits and where the limits are set in terms of what is acceptable and what is not. Another issue that comes up is what certain critics of the concept of tolerance itself, mostly from the area of political theory, have pointed out: that tolerance is associated with cultures that are seen as more civilized, and that this had a role in all the colonial encounters where a European power would arrive somewhere and their account was that they were demonstrating tolerance towards the barbaric practices of the natives of X region.

This already creates an inequality, or exacerbates an existing inequality and layers on top of it the idea that the so-called civilized culture will demonstrate that by being tolerant towards this other culture. And in this sense, the idea of tolerance as ‘putting up with’ really comes out very clearly. That is a very problematic aspect of tolerance because the group that feels that they are being tolerated is aware that they are being placed below the other group in a civilizational hierarchy. In the long run, that can have very negative impacts because communities or individuals who feel that they're being put up with will ultimately often have problems with self-esteem or with how they identify, which group they identify with, and this can actually lead to violent assertions of certain kinds of identity.

The term convivencia comes out of the study of medieval Muslim Iberia. The term literally means simply coexisting. But it's been tied to that history of the Muslim presence in Spain and that topic has been so hotly contested by Spanish historians in terms of how to define Spanish identity—if it's more European or more North African and Muslim. It's such a hot and touchy topic that the term convivencia, in almost any context within Spain, is going to bring to mind that history of contact between Christians and Muslims within the Iberian Peninsula.

But the interesting thing about how that plays out in this small town that I study in the book is that you have a group of European converts to Islam, who already are mixing up categories that are generally considered to be very set and discrete. And then you also have North African immigrants who were born and raised as Muslims, but may or may not be practicing Muslims at this point in their lives. And from the perspective of most of the townspeople, the ones who are from that region for generations, they sort of lump them together. So there's an interesting dynamic where those two groups who primarily only have religion in common—and even then, they have very different ways of practicing Islam—because they've been lumped together by other communities within the town, they have a vested interest in helping each other out and supporting the image of Islam in the town. So it's an interesting dynamic where each group has something to offer the other and they—just by this confluence—are shaking up some of the most established ideas about a clash of civilizations, and East versus West, Christian versus Muslim, etc. All these categories are shaken up by the groups that come together in the town.

Where is convivencia in Spanish television?

I wanted to point out how it's used in Spanish television shows that have come out. Between 2015 and 2021, roughly seven different television programs in Spanish had either a third of an episode or an entire episode focused on this town. That's because it's become known throughout Europe as this “hippie mecca.” And one of the things that struck me is that although only a few of them will use the word convivencia per se, many of the shows will make reference to tolerance and multiculturalism and then also bring in the history of the region.

And in these shows, what's tapped into the most is that convivencia image. Whether they use the word directly or not, they will make reference to the history of the region and indicate that that history is what contributes to this harmony in the town today. So I refer to it as a convivencia-washing because they present it as, ‘oh, it's this place of convergence of many different nationalities and religions and it calls to mind the time when Boabdil was here and, you know, the history of that….’ And they paint this very rosy picture of that time period, kind of leaving aside the clashes of the Reconquista, and don't get into the difficulties that are faced in creating the level of tolerance that exists in the town. So, in many ways, the town has been more welcoming to immigrants and to Muslims in general than other areas of Spain. But at the same time, there are certain tensions that arise between the groups, and my main point in the book is that by presenting such a rosy picture of the town, they don't allow for a more complex and accurate understanding of tolerance. They miss out on shedding light on how it is that tolerance is actually created, and what negotiations are involved in establishing tolerance.

How has personal experience influenced researching and writing this book?

This book is inextricable from my personal experience, and I think perhaps I've enjoyed working on it more than any other project for that reason. It resonates with my personal experience also in a much broader sense with the issue of identity and what is considered an authentic identity since I grew up in the Cuban-American community in Miami, and issues of who's authentically Cuban or who's authentically American were always sprouting up in different ways. In a way, going and visiting these relatives in Spain offered a third space that was outside of that sort of binary opposition between different identities that I was connected to. It allowed me to create this other persona as a Spanish-connected person. And it was interesting to observe how in this town, different conceptions of what it means to be Spanish are emerging.

Can a Muslim be considered authentically Spanish? In what ways yes, or no? Observing those kinds of dynamics that I'm so used to in another context was very interesting. It was just fascinating to me to see how each individual chooses to define themselves and which elements of their community they decide to use as markers or not. And so, related to that was the fact that I was going there at a certain point when my children were young, with the idea that I wanted them to be using Spanish more and have a chance to practice Spanish. Then all of a sudden, there were a ton of people speaking English in this town. So it was an interesting moment in which I had to confront my own intolerance. And I was like, this is just part of how human societies evolve. Sometimes we see changes in a very compressed fashion, and other times they take place over hundreds of years. But there's always been movement of people and contact between languages and cultures. And that's not going to change. What can change is our attitudes toward it.